The Jigsaw of Life

Some weeks ago, our daughter started work on a jigsaw puzzle. Not your average jigsaw puzzle, but a 2000 piece monster that rates as one of the hardest puzzles attempted in our house.

The jigsaw decided to occupy the dining table, for this was the only large enough surface off the floor. I won't say flat surface; the table is elderly and bulges in places where it'd rather not, as some of the elderly are wont to do. It also has cracks between its planks which are wider than jigsaw puzzle pieces. Hence the jigsaw remained in its box for some years, until we gave up on finding perfect puzzling places or ever using the dining table for anything but projects.

I avoided the puzzle at first - I couldn't see how any progress was possible with that muddle - until the day I came down with one of those viruses that renders the victim irritably useless, but not bedridden. By then an identifiable picture portion was respectably filled in. There was a vast expanse of rambling, random and often out-of-focus foliage to go, about 1700 pieces.

What an ideal occupation for my fuddled brain... its attention span of 2 minutes exactly matched the time required to take one piece and wave it hopefully over the edges of completed puzzle. Not only that, but jigsawing (should that be 2 w's?) also offered the occasional sense of fulfilment so soothing to the frustrated 'flu-ish human: I could ACHIEVE something!

The jigsaw rapidly proved to be much more than a time-filler for the mentally and physically impaired. In its 2000 pieces it embraces much of life.

I found out first that the puzzle wouldn't be pushed. I could progress so far (usually for 5 minutes), then forward motion came to an abrupt and immutable stop. There'd often be a warning bell; a sense of 'thus far and no further'. No amount of sweat and searching the box and striving could make anything happen.

The next tip was that the more unlikely a piece looked to fit in, the more likely it was just right. The perfect piece was quite different, separately, from its neighbours; the puzzle's details changed that swiftly. Yet once the pieces were put together, I could sit back and see that the apparently impossible pattern did make sense.

Sometimes I tried to be smart and analytical. Ignoring mere clues of colour and content - always misleading - I went for the shape of individual pieces. Foolproof, eh? Well no. It's amazing how many imperceptible variations there are on jigsaw piece shapes. The most obvious matches were frequently dead wrong. My eye would forget the needed format in the moment between the hole and the box. I'd easily be distracted by all the other shapelets screaming, 'Choose me!' The human brain, conquered by a few bits of coloured cardboard. I've been put firmly in my place.

More than once I thought, 'Are you sure there aren't any pieces missing?' But the elusive connection always turned up eventually. Usually the necessary piece was sitting near its hole, but I hadn't recognised it. Or I was sure I'd tried it in that spot so many times before... only, this time somehow it would go in easily. One of those mysteries familiar to frequent fliers in the world of jigsawry.

Contrariwise, as Tweedledee would say, the number of remaining pieces appears to exceed vastly the space available. Why all these seemingly extraneous bits? Will they ever mean anything?

Unlike real life, I have had a finished picture to guide me. However, it hasn't always been much help. For a start, it is besmirched with trademarks over the trickiest parts of scenery. Crisply focussed, the boxtop photo seems a different world from the fuzzy, blown-up-beyond-healthy-limits reality growing slowly on the tabletop. Maybe this isn't so estranged from real life after all: those glimpses of life in the Spirit as seen in the Scriptures, compared with your average Wednesday.

The puzzle is enticing - too hard - irresistible - invincible - boring and adventurous and frustrating and fun. It holds overwhelming challenges and brief exhilarating successes which, although small, are real steps towards the goal. 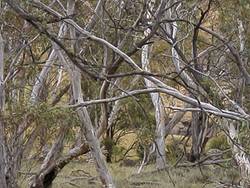 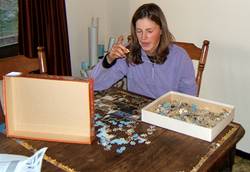