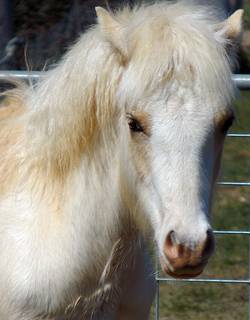 Browneyes, they called him. He had the darkest hugest orbs, that swore innocence every mendacious moment.

'Larrikin', I'd have named him, and not in the cutesy folksy sense either. Transported in time, that pony would have found his calling as a leader of the push.

If he felt like it, he'd do anything for the kids - swim in the dam, bush bash or help his rider to smash in a battalion of orcs' heads. Only in Browneyes' mind, they were more likely elves' heads.

If he didn't feel like it, he'd buck or drop to the ground... or run backwards faster than he could ever go forwards. Of course, one whiff of an adult and Browneyes would turn blind and deaf and paralysed in all four legs. And what stubby hairy legs they were.

Browneyes' record included knocking over a CWA cakestall and eating the scones, annihilation of a troopful of Scout tents at 3 am, breaking and entry at the produce store and countless escapes from custody. There was a 'Caution, Wild Horses' sign on the highway, just for him.

That pony was the dream of every kid in the district, and the nightmare of most of us parents.

For a memorable Anzac Day, someone had the bright idea of a re-enactment by the kids. A mini Gallipoli, with Turks and trenches and a beach landing. Now this was too much for the RSL, 'R' not standing for 'radical', so they planned it for a few days before the Big Day, and to be held at the school. It was an education all right.

The teacher was new. When the kids offered Browneyes to play the part of Simpson's donkey, he agreed without too many qualms. This pony, the kids assured him, had taught most of them to ride, was bombproof, childproof, trumpet resistant and accustomed to all kinds of commotion. Well, he would be. He caused most of it.

They used the scrubby ground beyond the oval, which was usually out of bounds. The teacher had suggested reconnoitring the ground together to assess suitable Anzac and enemy positions. The kids were happy to oblige, but somehow their original plans didn't need any alteration.

The day came. Browneyes the Ambulance Donkey joined the Anzac cast, complete with ear extensions and a charcoal donkey cross on his back and shoulders. His current owner stood proudly at his head, and a courageous injured Anzac sat on his ample back. Since this was a Department of Education exercise, the Anzac wore an approved equestrian safety helmet. I don't think his Mum would have let him on Simpson's donkey otherwise.

Well, Browneyes was a star. He lowered his giant ears and softly plodded with his doleful burden. Braving snipers' shots, he wound along the steep paths with never a stumble. When Simpson tripped on a fallen iPod, his donkey waited quietly for him to find his feet. The teacher was rapt. The kids applauded. The parents waited nervously.

It came with an unexpected air attack, not recorded in the official history of Gallipoli. A bright red Cessna pounded into view and over bemused Anzacs and Turkish soldiers. And Browneyes exploded.

He bucked, once, twice, three times. His wounded passenger soon sustained a bevy of extra bruises. Simpson sensibly dropped the rope and dived for cover. Browneyes bucked again, and his donkey ears flapped crazily. That drove him madder. He took off right out of Shrapnel Gully and across the oval.

The plane came in for a second attack, but Browneyes had its measure. He headed straight for the shelter of the classrooms. Through the flywire door he crashed, and into the upper primary room. Demolition derby! Books and chairs flew, tables toppled. There was a crash of laptops underhoof. One ear went sailing as Browneyes spun and buckjumped into the artroom.

The kids must have been in a hurry to finish their Anzac mural, because the lids weren't on all the paint bottles. Browneyes knocked them off the shelf and as the bright ooze spread, he forgot about the plane. This was fun! He grabbed a bottle with his teeth and swung it round. Then another, and another. He was a red and blue and green skewbald donkey now. But there was more in this room. He backed hard into a second shelf, and created a scatter of glitter and glue and coloured stars. A high box yielded more treasures that he sniffed at, and trod into the painted floor. Head high, he trotted off, snorting yellow feathers from his nostrils.

With his plane emergency over, the pony began to calm down. Browneyes was sweaty. He sunk down on the carpet and rolled a happy kaleidoscope of paint patches and a wiggly dark cross into it. He was puffing slightly too. He never let himself get uncomfortably out of breath, so it was time to slow down and think this adventure through.

He came to the corridor next. Schoolbags lined both walls. Browneyes stopped, one big ear askew. He knew schoolbags. He brushed his muzzle along the top row; yes, some were open. A quick nuzzle inside each revealed that the odd lunchbox lid was loose. Browneyes the scrounger was in full swing! Chocolate biscuits, apples, a cheese and bacon roll and a large mouthful of sultanas disappeared quicker than a flutter of his long eyelashes.

Now it was time for a drink. He smelt water and walked to a room at the end of the building. He pushed open a door to reveal an oddlooking bucket. There was only a little water in it, but he dipped his nose in anyway. Then he backed out and strolled up the corridor.

There was a racket and a half outside. The two armies had arrived at last.

Simpson's donkey pushed his head through the broken flywire and gazed at the invading forces calmly, his dark eyes shining. 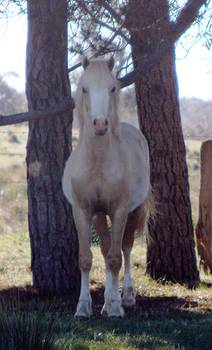